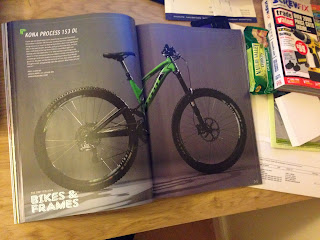 A few of our teams guys have just started riding this bike and have been raving about it ever since. It seems everybody that rides one absolutely loves it. Dirt magazine went as far as to say this is their most significant bike in the past decade, then actually go on to say its in the top three 150mm travel bikes available right now!

Here is what Dirt 100 2014 had to say:
"A year ago we would never have dreamt that we would have three Kona bikes in the Dirt 100 this year, but boy have the company turned things around, so much so that we think this is their most significant bike in the past decade. Actually, we'll go further than that, we think this is definitely in the top three 150mm travel bikes right now.

Nobody who has ridden this 27.5" bike has had a bad thing to say about it, in fact everybody who has ridden one has come away with a massive grin and been unable to stop going on about how bloody good it is. So yeah, we like this one a lot. It's fun, fast, comes with well thought out kit, and generally rides like a dream. What more can you ask for?"

There are two models available with the Kona Process 153 at £2699.99 and the Kona Process 153 DL at £3999. They will be available at Singletrack Bikes but not until about February/March. You can pre-order yours by giving us a call or sending an email to guarantee you will get one, because Kona have sold most of their allocation already. They are definitely a hit already!